Merritt Mauzey: The Art of Work

Merritt Mauzey (1897-1973) was a West Texas farmer whose printmaking interest came late in life. After a harsh defeat as a cotton sharecropper, Mauzey moved his family to Dallas to work in a cotton export office. While in Dallas Mauzey regained his passion for drawing that had been formed as a boy living in Sweetwater, Texas where he completed correspondence art courses. While Mauzey’s draftsmanship, figurative skills, and printing abilities were not especially precise, his documentation of West Texas rural life meeting American modernity fascinates. Mauzey portrays work, cotton, ranch life, West Texas landscapes, and rural work in the midst of a struggle between new and old.

Mauzey was the first artist in Texas to receive a Guggenheim Foundation award and a founding member of the Lone Star Printmakers. He  donated an  archive of a vast number of prints, most of which are undated, to several museums, including the Museum of Texas Tech University. 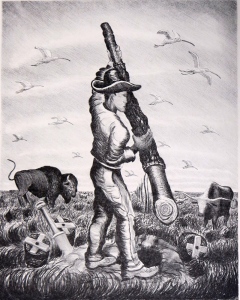 Because Mauzey trained through art correspondence courses and had minimal “hands on” art training, many of his figure drawings tend to be out of proportion. His lithographic crayon marks at times lack variation, but still something endearing persists in each image. Perhaps the naive, unadorned nature of the drawing makes them more substantive, more personal. When Mauzey started printmaking in about 1933,  he sent his drawings to a printer named Theodore Cuno in Philadelphia to be transferred to stone and printed. It is unclear which works were created in this manner because many of the lithographs lack specific dates. At some point Mauzey purchased his own press and stones, fueling his printmaking passion.

Mauzey,  a consummate workaholic, often suffered health issues because of long hours spent at his day job with Firestone Tire and Rubber Company of Dallas, followed by long evenings dedicated to obsessive printmaking. Transitions depicts a rancher putting in a barb wire fence, keeping cattle in and ‘wilderness’ out, documenting the switch from free range ranching to modern pasture, farming and feed lot practices. Mauzey’s experiences in West Texas ranching of the early 20th century is the subject of most of his lithographs. What Mauzey thought about  free range versus pasture grazing is not clear,  but it is well-documented that fencing created a new Texas landscape. 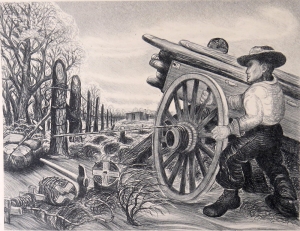 In another fencing print, Resourceful, a rancher tightens a barb wire line with the wheel hub of an old wagon wheel.  Out of proportion hands, taking on a character removed from the rest of the figure, become focus points that reinforce the artist’s documentation of ranch labor. Mauzey has a unique visual vocabulary, particularly evident in the rendering of the barb wire spools, the land, the mark making that makes up the figure, and the attention to authenticity. 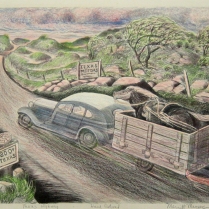 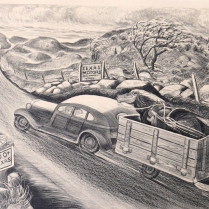 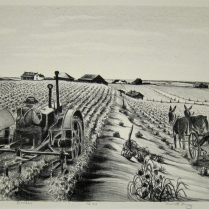 In Mauzey’s Texas Highway a car tows a horse in a trailer through the West Texas landscape. The image marks the rise of automobiles and the decline of horses as primary modes of transportation. The illustrative and comical speed lines trailing behind the car emphasize the speed of the vehicle. The wind blown horse looks ahead, perhaps to an increasingly mechanized future.

In the lithograph, Brothers, Mauzey contrasts two men and their individual approaches to farming cotton. One rancher uses a modern tractor, and his side of the field appears to be more bountiful, his house and outbuildings more grand, the actual elevation higher. The other brother plows by mule, his land is more scraggly, his home more modest, his land lower. A wireless fence separates the two men, creating a border of emptiness.

4 Responses to Merritt Mauzey: The Art of Work