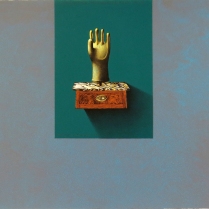 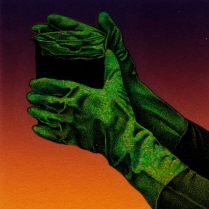 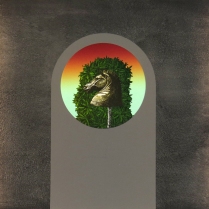 Utah native W. Wayne Kimball was born on 15 July 1943 in Salt Lake City. He holds a Bachelor of Arts degree from the College of Southern Utah, Cedar City, and a Masters of Fine Arts degree from the University of Arizona, Tucson. He also is certified as a Master Printer from the Tamarind Institute, University of New Mexico, Albuquerque. Kimball’s teaching experience includes a number of faculty positions at universities in New Mexico, Wisconsin, California, Texas, and Arizona. He was a Professor in the Department of Visual Arts at Brigham Young University in Provo.

Although written in third person, the following artist’s statement best conveys who Wayne Kimball is as an individual and as an artist:

“Wayne Kimball is a right-handed Caucasian male artisan who makes lithographs in suberranean chamber situated near the mouth of Battlecreek Canyon. Although he does no hear very well, he does wear bifocaled spectacles to improve his visual acuity. He showers early every morning, and has a day job impersonating an art professor at Brigham Young University.

“He admires artists who have the facility and restraint to deal with observable forms by implication: suggesting, hinting or otherwise providing visual clues (rather than explicitly rendering everything) thereby allowing the viewer to participate in the art-making process by using his or her imagination to complete the pictures. Despite the admiration, however, Kimball is compulsively self-indulgent in the pleasure of making crayon tones and tusche washes on slabs of Bavarian limestone and plates of grained aluminum. He is unable to resist working images to a level of finish that denies the viewer the right (or rite) of optical completion. To make things worse, he prefers small, intimate formats over larger ones (which rubs against much of what he was taught in graduate school by professors who thought in terms of Abstract Expressionist and Pop issues). His idiosyncratic preferences for small scale and high finish seem to derive in part from a boyhood of viewing art in reproduced form in books and magazines rather than in actuality on gallery and museum walls. That perception of art may well have something to do with his choice to employ thin veils of ink printed on paper rather than paint on canvas, drawing material(s) on paper or fresco on damp plaster walls.”

Kimball’s most recent art includes collages. Although somewhat different from his lithographs (less representational), people have told him they recognize the works as his. He has found it satisfying both to create the collages and then also to use some of the formal materials in prints he is making.

Kimball has had over 40 solo exhibitions at various galleries, museums, and educational institutions. He has also exhibited at over 250 regional, national, and international juried and invitational shows. His work can be found in more than 55 permanent institutional collections.