from the artist’s website concerning his present art research:

My current work takes as its central focus the theme of Surveillance. Some of my recent prints have specifically addressed the use of the new body scanning technology recently introduced at airports and these prints include representations of scanned bodies, but also other imagery that is evocative of flight/aircraft. It is through traveling that I have been perhaps made more aware of the information that is collected. To enter the United States my biometric details, fingerprints, retinal scans, are collected. Certainly this information is collected for good reason but it has made me question the wide range of surveillance we are under everyday.

In our increasingly technological society it is also becoming common to be spied upon or to spy on others in some way. In many cities, just walking down the street can mean that you have been filmed or photographed many times, either from street cameras, ATM machines or by cameras inside shops or subway stations. It would be extremely difficult in these areas to go about a normal routine without being photographed.

The use of bird imagery, in some of the prints, acts as a metaphor for surveillance: being seen from above, or watched, and this is often combined with other elements, such as a plane, for aerial surveillance, or more recently with cameras. The bird also adds an emotive and expressive character so that the viewer will not just see a sterile representation of equipment, but rather will be made aware that it is controlled, or perhaps programmed by individuals. 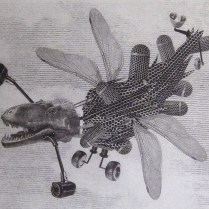 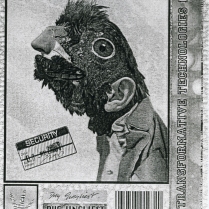 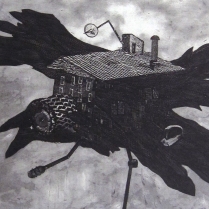 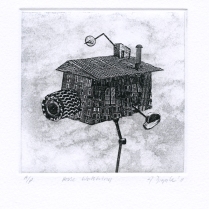