Patrick Nagatani died on October 27, 2017 after a long struggle with colon cancer. He was 72. Obituaries can be read in the New York Times and the Albuquerque Journal.

The Artist Printmaker/Photographer Research Collection holds two important portfolios by Nagatani, Nuclear Enchantment (1989-90) and Chromotherapy (2004-07). The former explores the role of atomic research and testing in the Land of Enchantment (New Mexico) and the latter investigates the role of light and color as a source of healing. Nagatani carefully constructed each image that he photographed–fabricating scenes, painting backdrops, and installing props to create visual fictions whose narratives walk on an edge between irrational and rational.

Nagatani was born just a few days after the bombing of Hiroshima. Both his parents had been interred in different Japanese Relocation Camps during World War II (one in Arkansas and one in California). 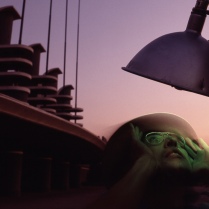 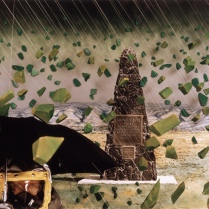 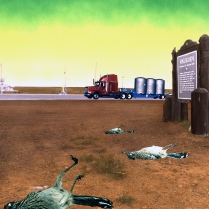