Drypoint, directly drawing an image with a sharp needle on a matrix, lends itself to expressive mark making of quickly rendered, sometimes sketchy, often emotive images that produce silky black lines. Typically drypoints are drawn on copper or zinc plates and usually a drypoint edition consists of a smaller number of prints than an etching, engraving, or lithographic edition. With each pass through the press the drypoint lines and burrs (the metal moved to the side by the pressure of the needle) compress and the image tends to lighten.

The technique of drypoint was probably first executed by the Master of the Housebook in the late 15th century.  These rare prints capture the spontaneity and looseness that characterizes drypoint, a process closely related to direct drawing. Very few printmakers from the 15th through early 19th centuries  worked exclusively in drypoint; more commonly the  medium was used to add tonal variety to etchings or engravings. In the 19th century artists started using drypoint in response to what was seen as mass production madness spawned by the industrial revolution and by the early 20th century German Expressionists such as Max Beckmann took up drypoint and created striking works with the technique.

The small edition sizes of drypoint prints, typically less than thirty, tended to eliminate the technique from commercial applications. According to Adam von Bartsch the maximum edition size possible with engraving and etching can reach well into the hundreds, while wood relief can be as high as ten-thousand. Perhaps the limited production of drypoint prints is a factor in its rise in popularity among modernists.

Drypoint can be executed on sheet acrylic, commonly known by its trademark name, Plexiglas. The slippery surface of acrylic resists the cutting of the drawing needle, challenging the artist’s ability to control the tool.  Factors such as press pressure, quality of acrylic, and depth of line also determine how many prints a plate can produce before incised lines fade away and the plastic burr flattens. Paulsen uses thick acrylic sheets as matrices to create his drypoints. His stylus of choice for drawing is a needle sharp dental tool. 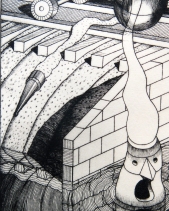 Paulsen created two states of Night Watchman. In the first state he wiped the plate clean and printed several impressions. In this early stage of his drypoint, the printed lines reflect a signature silkiness and rich darks afforded by Paulsen’s dental tool. This earlier state also maintained the borders between well-defined areas of black and white.

When compared to Paulsen’s second state of the same image, the chiaroscuro effect of dark shadows against bright highlights is minimized. Paulsen filled in detail on the banks of the waterway, the fire hose, the houses, and the wood grain of the railroad track. The  fill created less contrast; night creeps in rather than bombards the image, highlighting a streaming plume of fire from the figure’s head. Moreover, the breakdown of the drypoint burrs also led to a lightening of printed lines.

Paulsen’s lighting in his prints infuses them with drama. In both states of Night Watchman, the light emanates from a partially submerged figure’s flaming head. The bright light casts deep shadows across a shallow landscape. The light quality changes from state to state based on the condition of the matrix, ranging from deep black lines created by the drypoint’s burrs, to a more subtle and richly crosshatched environment. Actually, the second state looks more like an engraving. Paulsen also frequently creates his lighting by simply omitting detail, utilizing the white of the paper.

The staged drama of Night Crawlers creates a scene of cartoon terror. One of Paulsen’s toy-like characters wanders a darkened backyard with a flashlight, while another of his staple visual elements, a disembodied tiger paw, creeps behind ready to slash an unwitting egg-shaped investigator.  Some unknown entity, perhaps just out of the picture, controls the tiger paw on a stick. One hint that the danger is manufactured is the number of claw marks on the window and wall of the domicile number six, two too many claws to be from a real tiger. A flashlight’s beam cuts a triangle of scenery reduced to contours. The little ovoid creature appears at the edge of some plumbing disaster that has occurred in, standing on the precipice of a wide hole in the ground.The dramatic tension warrants a viewer to scream, “Behind you!”, to the investigator and imminent victim. Another ovoid character watches the impending attack from the safety of a well-lit bedroom on the second floor, and a third character casts an almost imperceptible shadow in the first floor bedroom. The suspense and voyeurism of Alfred Hitchcock’s Rear Window comes to mind. As in Night Watchman, the lighting effects in the bedrooms and from the flashlight are also created by the omission of finely detailed lines such as the ones that make up the walls, and lawn.  The abundant straight lines of the print evoke engraving, but elements such as the forest and the contours of the round figure and paw indicate a drypoint’s fluid marks.

1 Response to Brian Paulsen: In Detail